skip to main | skip to sidebar

Winter has arrived, at least in some areas, and Jenna couldn't be more thrilled. I'll admit I was really dreading the start of winter figuring it meant another long season of hibernation but I'm starting to have a bit more optimistic attitude. Last year it seemed Jenna would get cold pretty quickly and trying to amble around with those short legs in snow pants and big boots was only fun for a little while. On Tuesday however, she couldn't wait to find those "pants thingy's" (a.k.a snow pants) and her mittens. We headed outside for an afternoon of fun! With legs that have grown substantially since last year making them more proportionate with her very large feet she ran and ran and ran, giggling all the way. A few other things that made the snow fun.... 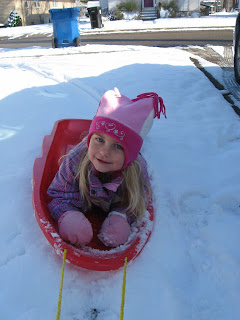 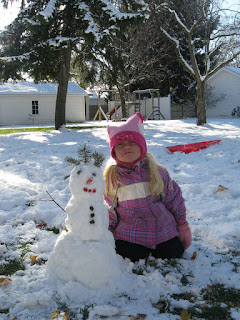 Building a snowman, and eating half the carrot 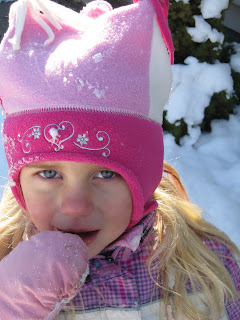 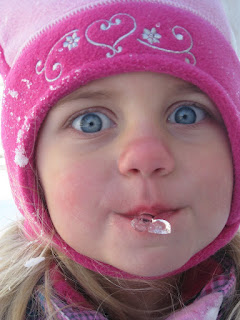 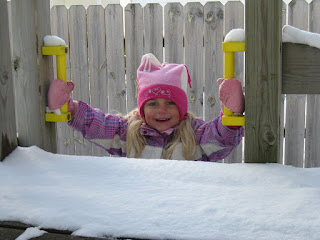 Playing on the swing set while it's covered in snow!
A snowy day + lots of giggly play = EASY bedtime...I'm not sure we were out of the room and she was out for the night.
Posted by The Kapenga's No comments:

I really don't do any serious, heavy posting but this one's a little more like that. This is just a post about an experience and how it has taught me something. I'm not typically a Christian that wears my faith on my sleeve. I get upset when people suggest that this type of behavior is not really being "Christian". I don't think that being a Christian must consist of daily public accolades of how much God has done in my life. Before you judge please give me the benefit of the doubt and keep reading. I'm a believer in the actions speak louder than words kind of living. Genuine actions that come with no strings attached, being a real person to those around me and through that I hope they see love, kindness, gentleness, sincerity, unselfishness.....the spirit of Christ....not just the right words.
Why do I post this? Sunday our church didn't actually have church. Instead we were asked to sign up to "do" something to show our love to the community around us. It wasn't about carrying around Bibles and ministering to all we came into contact with. It was all about showing others an outflow of Christ's love with nothing but our actions. Dave and I signed up to go door to door to collect food in the Zeeland area for His Harvest Stand. Their need at the food pantry is immense with donations being down and families in need being up. In the past 2 1/2 years I've looked at my bank account and been scared by how little money was there and I've been hungry for my next meal before but I have never actually been without food with no way to get it.
I was a little concerned that doors would get shut in our face and people would be unwilling to give but the morning proved to be anything but that. Home after home people graciously gave out of their own cupboards, be it a can or two or almost an entire grocery bag full. I have no idea if these people went to church or even know who God is but that didn't matter, they chose to give. To make my point about actions speaking louder that words was the one woman who shut the door on me. When I told her that our church was collecting food for the pantry she asked "what church?" I told her I was from Victory Point. She looked annoyed and responded with "I give to my own church" and shut the door. Is that the idea that we as Christians give to those around us, that being part of a church is as though we are a member of some exclusive club and that's as far as our Christianity goes? This lady was dressed in her Sunday best when I was on her doorstep but her actions made it seem as though any words about God's great love that had been spoken to her during the morning service had fallen on deaf ears.
Just as any TRULY genuine act of kindness there was no reward or recognition for participating. The funny thing is that when you're not looking reward, you get it. The reward was simply the feeling of knowing that as we carried the bags and boxes into the food pantry the shelves would be filled to feed families for another few days and that in a world where so many things seem dismal and bad there are people who didn't say a single word about God or their faith as I took their food but through their action of giving made me feel as though there is hope in the world. So my thought for the day, speak or act?
Posted by The Kapenga's No comments: 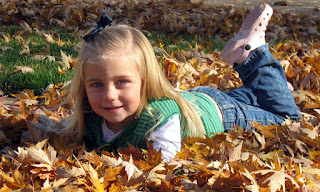 The weather last week was so wonderful. We spent plenty of time outside taking advantage of the warmer than normal temps before going into hibernation. One nice thing about living in town is that when the leaves fall from the trees all we have to do is rake them to the road. Don't get me wrong, there are still a lot of leaves and we get sick of raking them all the time but at least we don't have to bag them. Jenna helped me one morning and had a ball jumping in them, throwing them and posing in them for a picture. 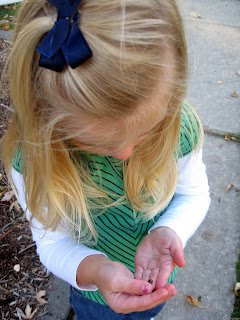 Later in the day while playing in the backyard Jenna found a ladybug. She is fascinated by bugs and will even touch some of them, she does not get this from her mother. She got the ladybug on a leaf and carried it around for about 10 minutes picking it up every time it fell. She must have gotten sick of dropping it so she decided she'd just put it in her hand. That was good for a period of time but then she decided that ladybug needed a home so I went old school and got out a glass jar. We furnished ladybugs home with some wood chips, grass and a leaf. Jenna watched curiously as the bug crawled around. This tiny bug provided an afternoon of entertainment. When Dave arrived home she was more than excited to share her latest find with him and told him all about how she caught the bug and the home we had made. She then asked Dave to help bring ladybug home, so off the two of them went outside where Dave placed ladybug back onto a branch. Jenna thought ladybugs friends might miss her if we kept her inside all night....too sweet. 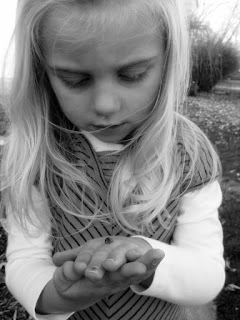 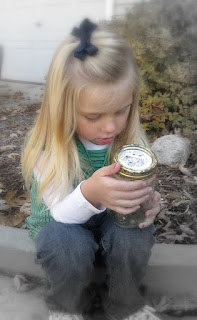 Posted by The Kapenga's 2 comments: 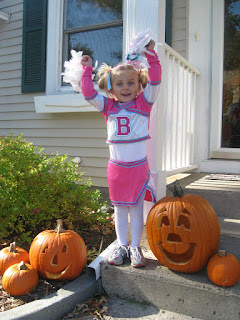 Jenna was so excited to be a cheerleader for Halloween. She and her dad went shopping for her costume. I was excited that the weather was so nice making her costume a little easier to wear without her freezing. She had a ball the entire day! 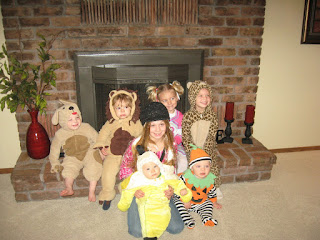 All of Dave's nieces and nephews dressed up together for a picture...quite an accomplishment.
Jacob the dog, Oliver the lion, Jenna the cheerleader, Grace the leopard, Hannah as Hannah Montana, Jonas the Banana and Evan the pumpkin...Silas the pumpkin had not arrived yet. 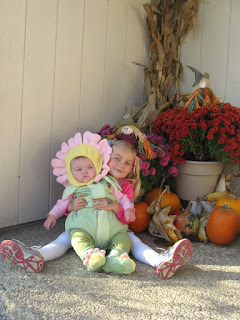 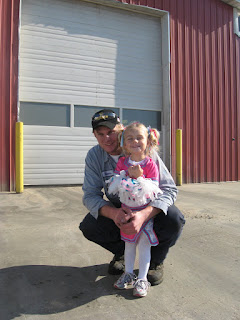 We even stopped at ZFS to see uncle Travis at work since Jenna would be at her dad's by the time he was done working. Jenna thought it was pretty special that he had a whole big bag of M&M's for her! 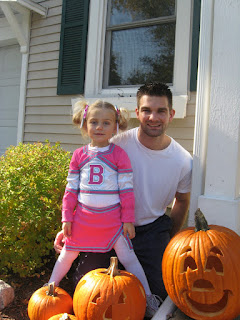 A quick picture with Dave before we headed off for more stops. It was a busy day of visiting grandma's and great-grandparents but all worth it. She loved trick-or-treating door to door with her dad and some friends and by all accounts had WAY too much candy to eat.

Posted by The Kapenga's No comments: 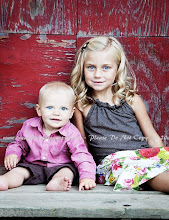 The two little blessings that keep us busy!

The Kapenga's
The journey of the Kapenga/Meyer clan officially began on 8.8.08. Jenna was already 3 at the time and in September of 2009 we welcomed Garrett in our family. We are now eagerly anticipating the arrival of #3 in May 2011! I love being a mom to Jenna and Garrett. These two precious little people remind me daily of what really matters in life. I have been blessed to continue my marketing career by working from home as a marketing consultant with Image Builders Marketing (although working from home with kids does come with challenges). Dave is a toolmaker at Drawform. We live in Zeeland and love being close to family and friends to share the adventure of life with!